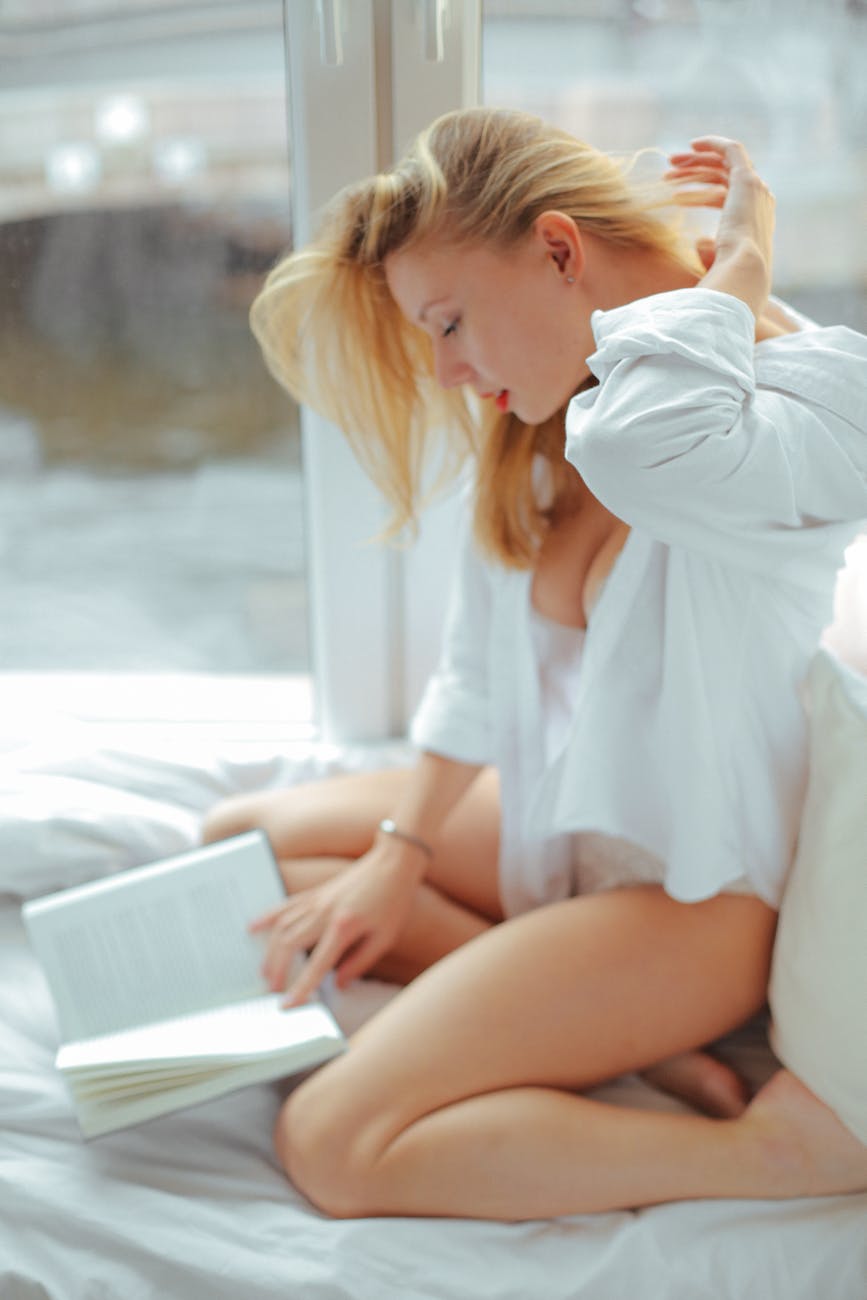 He showered and changed into another pair of shorts and t shirt, Heather sat in the lounge legs curled under her bottom leaning on the arm of the sofa reading one of his books. She looked a complete picture of serenity wearing his shirt, her fine smooth legs peering out from beneath it, her cleavage tantalising him, her breasts nestled in-between the half buttoned shirt.

“Yes, come on, I have to be up early anyway. I have a video call first thing.”

He lead her by the hand through to his bedroom, she flopped face down on the lush soft bedding, her shirt rising above her buttocks revealing her ass that not too long before he was pounding with his cock.

She wriggled herself under the thick eiderdown duvet; it was warm in the day but still chilly at night this time of year.

“Spoon me Mr Writer” She lay on her side in a foetal position waiting him to join he peeled back the covers on the opposite side of the bed and climbed in shuffling his way up behind her. Reaching over he wrapped his arm over her and reached around tucking his hand underneath her, pulling her close to his chest, the crack of her ass pressed against his crotch.

“What time do you need to be up Mr Writer?”

He could hear her breath soften as he held her, her chest expanding and contracting as she drifted off in his arms. He held her tight not wanting to let her go, savouring her presence in his arms and in his  bed.

He woke before his alarm; he could feel he was hard, warm and wet. As he came round he realised she was no longer in his arms. Her head bobbed up and down under the duvet, her lips locked around his cock as her throat devoured his swollen length. She was aware he had woken up and broke off her vacuuming of his cock.

“Morning Mr Writer”. Came her voice from below the duvet.

Her mouth then clamped hard around his cock again; her hand wrapped around his balls and the base of the shaft squeezing him hard constricting the blood within his engorged glans.

He could hear her swallow each blast as it pumped from his cock until his balls were empty, his head span his eyes rolled in his head. She planted a kiss on the head of his cock and tunnelled her way under the duvet towards his face.

“Mmmmm Mr Writer, any coffee to go with that cream?”

Moments later his alarm sounded. He made her coffee and quickly showered in time for his call. Heather sat in his bed watching him go about his morning routine, they chatted until he had to log on to the call.

The call was dull, artwork, layout, fonts etc “Fuck sake” He thought to himself. “Why can’t these people just make a decision. His publisher was babbling on and stamping her own views on everything, she didn’t do team work; she did it her way and her way only.

Heather had crept in and sat on the sofa out of sight of the web cam. He tried not to stare and focus on the call but she teased him flashing more and more of her breasts, thighs and quick flashes of her pussy. She knew he was having trouble concentrating and played on it, her tongue flashing across her luscious pink lips. His cock stirred again and she knew it. Her hand slid between her thighs and she gently rubbed herself seductively as she parted her legs slowly wider and wider.

“Are you fucking looking at this or what?” The Publishers voice boomed out of his laptop.

“Yes, yes, sorry.” As he stared back in to the screen.

Heather seized her moment and slid from the sofa, he didn’t dare take his eyes off the screen as he knew he would get another salvo from the Publisher. From the corner of his eye he could see Heather crawling on all fours under the end of his desk; his cock twitched to a semi erect state as her hands slowly eased their way up his bare legs to his thighs, her nails tickling his skin as his cock pumped full of blood. He could barely keep a straight face in front of the webcam; he knew what she was doing under the desk and had a fair idea what she was going to do. Her fingers reached his balls, her nails scratching finely at his sensitive scrotum; he could feel the pre-cum trickling from the eye of his cock. She grabbed his balls in her hand, massaging, rotating, teasing them.

He still couldn’t break his gaze from the screen as the intricacies of the days’ work required his full input. He felt his shorts being pulled from underneath is buttocks as Heather tugged them down allowing his cock to spring free in front of her face. He glanced momentarily down to see Heather staring back at him, her grin interspersed with a lick of her lips as she continued to tease him.

Her thumb and forefinger scooped under his ball sack and reached around the base of his shaft, clamping it tight. He couldn’t believe she was doing this but he sure as hell wasn’t going to stop her. “Boy this girl loves sucking dick.” He thought to himself as her tongue licked the eye of his cock savouring the taste of his pre-cum before she slid his entire length in to her throat.

The screen closed down and he turned to face her.

“Well I’ve had worse days at work.” He grinned

She smiled back at him “I thought you might have liked it.”

“So what’s the deal with Saturday?” She continued. “Do you still want me to come?”

“Yes of course I do, do you have something playful to wear?”

“I think I may have something” She replied. “But, I don’t want to be left on my own, you’re going to be busy, which I understand, just, well, you know.”

“Well since it’s my marketing event, you could bring a friend if you like”

“Well you know its fine with me, I have a chauffeur picking me up at nine so you can come here or we can pick you up in town.”

“Good with me.” He replied.

He laughed. “Not really, help yourself to the shower, I’ll go make coffee.”

Heather showered and they drank coffee on the porch before she left for work. She was excited for Saturday especially if she could bring her friend.

“So I guess I’ll see you Saturday?”

“Yes I guess so, let me know what you are both wearing and I’ll try to get something to ‘accessorise’ with it.” He smiled at her, already formulating a plan in his mind.

One thought on “The Writers Toy. Part 5”

This site uses Akismet to reduce spam. Learn how your comment data is processed.